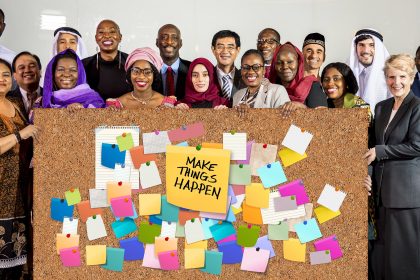 Fashion back in the day was not considered a very respectable career. In many parts of the world, it still is looked down upon. Especially in orthodox societies where the body is supposed to be covered and kept under wraps. Fashion on the contrary experiments and creates something unique every day.

In a society where the main purpose of clothes is just to cover body parts, coming up and doing some inexplicably creative requires a lot of chutzpah. Where a display of even an inch more than the “socially acceptable skin” is frowned upon. Fashion has a sense of revolution, an air of defiance, an act of rebellion in going against the norms. We wear confidence and all these clothes do is make us bring out the hidden parts and portray our individuality. Except for general public opinion, fashion has forever been a form of art and it ought to be treated like that. Ideas and not opinions define fashion. Fashion is a vast unfathomable ocean of endless possibilities and hence the magnitude of diversity is colossal.

If we are talking on a global scale with myriad cultures and the fashion changing accordingly, it is impossible to enlist all the various fashion styles around the globe. Fashion is something that can be personalized according to an individual, it is an extension of your personality and hence it is always unique. Culture always influences the way people dress up, their mindset about what looks good, and what is socially compliant to their land and culture.

The iconic and most distinguishing feature of the Islamic culture is the Burqa, the practice of wearing a veil usually covering the entire body to respect their Islamic standards. It is a token of modesty and humility. Wearing a hijab is a matter of choice, it is the free will of women whether they want to practice wearing the hijab or not. Burqa on the other hand has been more prevalent. A hijab covers only the head whereas a Burqa is clothing that covers the entire body. Similarly, there are Kaftans which is a robe or a tunic primarily worn by males, there are a lot of variants and styles available nowadays. The humble robe prevalent in the Middle East have exquisite fabric and a display of marvelous craftsmanship. The same goes with the Abaya or the cloak-like overgarment worn by women in the Muslim community.

Throughout the ages, it has been a humbling tradition but it is no more just a plain piece of clothing. The hijab and the Burqa have their very own fashion lines that are styled every year. There are a lot of various options and styles that you can choose from for the Burqa. Women wear hijabs in different styles. The way they tie it around the head makes it look chicer. There is a flourishing fashion industry entirely focused on these types of clothing. Fashion weeks in Dubai showcasing designer’s creations comprising of Kaftans and Abayas, Burqas, and Hijabs. There is a lot more to Islamic fashion than we know of.

All across the globe, you will find myriad styles in which people of different cultures use headbands, as headgears as turbans and whatnot. Talking oh head wraps, they are an imperative part of African attire. The vibrant colors and elaborate ways in which they tie up the wraps are more than just a fashion trend. They often depict the social of the person such as age, social status, and even the families that they belong to. Not very long ago, it was made compulsory for women to cover their heads while going in public and hence the prevalence of these head wraps increased. As is obvious, it is the human tendency to stand out and hence try to transform the banal versions with interesting ones.

We associate Turbans commonly with the Sikh people. It is a long piece of cloth around 6 to 7 meters depending on the size of the head, worn in vibrant colors by both men and women alike in the Sikh religion. Its main purpose is to cover the hair which they do not cut as respect for God’s original creation and keep it in the form as they got it. Not just limited to the Sikh, turbans are worn in different parts of India. Just the manner of tying it varies from culture to culture.

A tad too suave

Europeans have had a rather quiet old custom of dressing ‘crisp’ as you would call it. There has always been a lot of stress on how to dress properly. Attention to detail is imperative for an impeccable look. Along with decent mannerisms and chivalry, perfect attire lessons are a must for young lads. Coats, waistcoats, suits, and ties. Not just these things but they pay more attention to accessories like the pocket square or the gentleman shoes. Top hats have been in vogue since forever. The styles, designs, and sizes that are available are unfathomable. Be it bowler, boater, cloche, or caps, there is a different one for each time of the day and the work that you are doing.

It would be a bummer to go to a High tea underdressed! For the ladies, corsets have been prevalent since the very beginning. Women wore the fitted bodices as an undergarment to give more definition to the gowns and dresses. The smaller waist and bigger bust were an obsession in the community and were an integral part of Victorian fashion. The milliners to date create high-end fashionable hats for men and women alike. Catch up with any Royal event you will know how fashionable I am talking about exactly.

The Americans have had such a diverse cultural mix because it is a land where a lot of races culminate. Hence they portray abundant cultural diversity in the dressing styles as well. It is more about the trends throughout the decades. You can not call one fixed style that is unique to the culture. The Texan cowboy boots and hats, the leather pants, and the biker jackets are still some attires directly related to the American culture. Be it the ladies or the men, denim jeans have always been a go-to clothing piece for decades. They might tweak the styles a bit with every upcoming fall line. It is all about comfortable clothing, the culture differs from state to state and with 51 of those, it is impossible to bring it under one genre.

High-end fashion couture, the everyday denim, or the hipster jeans. From the 70’s bell-bottoms to the 21st century ripped jeans. Fashion has constantly been changing at a very fast pace.

Cultures have always had a massive impact on how people dress or their notions of what is fashionable in general. It is amazing to see how people have instilled their creative thinking into a few rather staunch traditions and the idea of clothing. The USP of any specific culture stems a lot from the way their people dress. Another thing that amazes me is how a custom for one person is merely fashion for others. For example, the African tribes get tattoos as symbols of bravery and valor whereas we get them as a form of expression. Accessories like the bindi or bangles are customary and hold more significance for Indian ladies might be a casual thing for others. What is important is to have an eye for design in whatever we come across, to blend and create something entirely new then judge the motive behind it.